Fire at the Fox (Andrew Lancaster)

Excitement lat night! We had been to the Chinese at Petworth to meet friends and after a very nice evening had a good drive home and a much needed early night.

But - about 12.20, I woke to hear the most astonishing thundering noises and wondered what on earth Dennis was up to?

So, wearing dressing gowns, we went down and opened the front door to be confronted by the landlord of the pub next door and a chap in uniform with a helmet, telling us to get dressed as quickly as we could and get out. fire next door.

So - without any concern for sartorial effect - we were dressed, down stairs, and out in record time - I did look for my camera, but realising that it was upstairs I left it and we went out into the rain.

As we went towards the pub / fire engine / ambulance, there was a great deal of smoke, blazing flames and confusion. We were ushered to the ambulance to stay dry and warm. (It fortunately served no other purpose that night!). Erika, the landlady of the Fox, her son Harry, Branjo the barman, our neighbours (Kay was wearing CURLERS!! With a flat cap on which she refused to remove - dressing gown -pyjamas...) were in there too. We were the only ones who had actually dressed rather than simply throwing a coat on!

It turned out that a bonfire at the pub had, presumably due to the wind, re-ignited and set fire to a wooden fence, pine trees, and goodness knows what else and was blazing furiously. We weren't allowed home for about 45 minutes but being in the ambulance was actually quite fun - the blitz mentality, I suppose!! Erika's puppies kept trying to bark - that funny age, where they can't quite manage and sound as though they need oiling....

Fortunately, the wind stayed constant in direction, which allowed the fire services to control it fairly quickly. The fear was that any veering would have set fire to the pub, or to the trees surrounding the school and of course the school itself.

Consequently, this morning we both feel shattered!

The excitements of a country life!!


See you all soon, 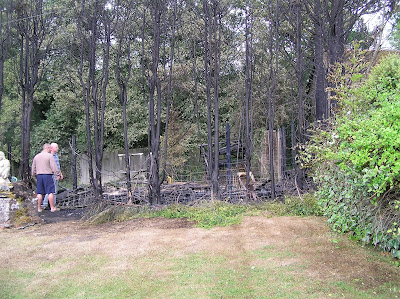 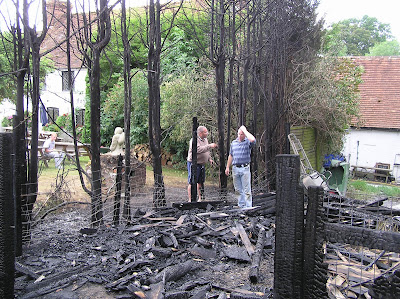 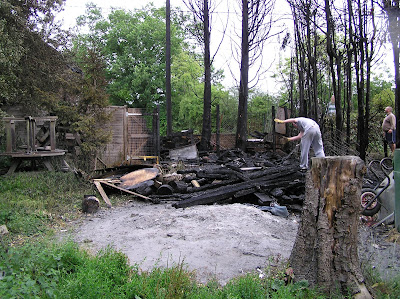 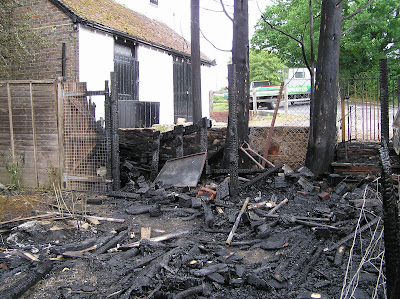 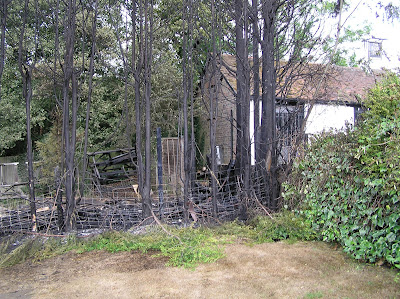